Our last Probate Paths blog discussed the effect of death on community property. Today, we talk about another complicated situation involving marriage, another marriage, and death.

Sudden death, no will, and an outdated will…

Hank and Dagny were happily married and living in the family home they bought together. Both had been married before and each had children from those marriages. Hank and Dagny died tragically in December in an avalanche while skiing in the Alps. Dagny never made a will. Hank left an old will in which his son Hank Junior and daughter Randi were the sole devisees. Hank’s will didn’t mention their current home or Dagny. The house is listed for sale by his probate.

What’s the Realtor® to do? And how would the title company approach it?

Who passed away first?

Because they bought their house together it would be community property and under normal circumstances the surviving spouse gets it. Since it isn’t in Hank’s will it’s not part of his probate estate. However, it would be if Dagny dies before he does. But – how can it be established who died first – or even if either did? In this situation the presumption would be that they died simultaneously, but how does that help?

The three children could try to dispute who gets what, especially considering the house could be worth a lot and the rest of the estate might be quite substantial. Maybe they are all one happy family and agree that the house can be sold and the proceeds divided up amicably. Or – Alice might claim 100% for herself, arguing that Hank died first and her mom got everything. Hank Jr. and Randi might do the same. Definitely Hank’s will is going to be probated, and Alice will likely want to open a probate on Dagny’s estate as well. But, what if she doesn’t?

The potential interest of each of the three children (plus any other devisee identified in Hank’s will) must be addressed. “

If there is no probate on Dagny’s estate it would certainly call for a “lack of probate” affidavit where Alice gives the facts as she interprets them. The title would also rely on the facts that Hank’s probate will tell them. The potential interest of each of the three children (plus any other devisee identified in Hank’s will) must be addressed. During the pendency of a probate it would probably accept a deed from the personal representative based on an order of the probate court clearing the sale.

The appropriate probate path if Dagny had pre-deceased Hank

Let’s start with Dagny. If she died first, under community property rules Hank would end up with the house. For however many years (or in this case, moments) that he survives Dagny, the house is his, and Alice would get nothing when he died. Then, at the moment of his death, his will would come into play, and Alice would end up with nothing, because she could get only what Dagny would have gotten – but she was already dead and so couldn’t inherit. Junior and Randi get the house.

This is Probate Path No. 3 if his will is probated. If his will is not probated, it’s Probate Path No. 4. Of course, in the latter case, the title company would want a “lack of probate” affidavit, which would probably assert that he was unmarried at death. In that case, Alice would be out of luck. But, that can’t be applied for certain, because the order of death isn’t known.

The appropriate probate path if Hank had pre-deceased Dagny

Similarly, if Hank died first, then Dagny immediately gets the house. His will wouldn’t control. Again, for however long Dagny survives him, the house is hers alone. Then, upon her death Alice, as her only heir – Hank having pre-deceased her – gets the house. As noted, however, this rule can’t be applied because no one knows who died first.

Assuming that both spouses have pre-deceased each other

If the probate is closed without the house being sold, then the title company would ask for individual deeds from Wesley, Randi and Alice, with escrow distributing the proceeds of the sale in accordance with mutual instructions from all three.

Our previous probate path blog post discussed the sad tale of Sam Smith, who died with no kids, and the happy tale of Rolf, his nephew and sole heir who discovered that he had the proverbial “rich uncle.”

As noted in the December 6th blog, there are three basic probate situations:

There are variations: did the deceased have a will? Is the estate being probated (with or without a will)?

Today we talk about another probate situation, this time involving community property.

A sudden passing with no will

Shelley and Norma are domestic partners, and live in a home that they bought together in 2009 (see the August 2011 blog post, “Domestic Partnership Law in Washington State” where community property laws apply to both a married couple and domestic partners). Shelley has two children, Albemarle and Adelaide, from a previous marriage. They also adopted a child together, Angelina.

Sadly, Shelley passed away from a sudden illness. She did not have a will. The question arises – who gets the house? Is it just Norma, or can Albemarle and Adelaide claim an interest, perhaps forcing a sale of the home in order to get their share? What about little Angelina?

This is a basic community property situation, and Norma inherits the house, free of any claims by Albemarle or Adelaide, and it becomes her separate property. When her time comes (assuming she doesn’t sell the house, get married or enter into a new domestic partnership before then), only Angelina would inherit from her.

“…the children don’t come into play when either parent dies – only when the surviving parent later dies.”

Now, if Norma had died first, the same rule would apply – that is, Shelley would get the house as her separate property. However, when she passes away, Albemarle, Adelaide and Angelina would all inherit the house. In any case, the children don’t come into play when either parent dies – only when the surviving parent later dies.

Determining who is in title 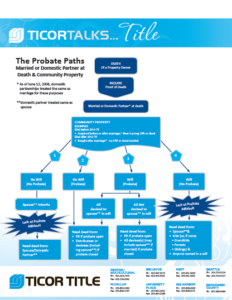 But we are getting ahead of ourselves. Right now, a Realtor® is listing the house for Norma, and the title company has to decide who is in title and who would need to sign a deed. If there isn’t a lot of money at stake a probate probably wouldn’t be necessary, so a “lack of probate” affidavit is the starting point.

Most community property situations are pretty straightforward, because when two parents own the home as community property it passes directly to the surviving spouse when one passes away, and their kids will end up with it eventually anyway. The chart to the right shows how the title company would proceed to identify who must sign the deed. As in Shelley’s case, with no probate for what is clearly community property, the Probate Path No. 1 is followed.

To view the probate path chart click here. (a PDF will open in a new window)

However, complications can arise when there are children from a previous marriage, and it may not be so simple for the title company. For example, Albemarle and Adelaide could raise a fuss, and even though it is apparent that Norma inherits the house, the title company may want to get a deed from them. Why might they want to make a claim? Well, Shelley could have inherited the house, in which case, even though that happened in 2009, it would be her separate property, and Norma could be out of luck. Or, maybe Shelley paid the entire purchase price with inherited money, in which case her heirs could argue it was her separate property because separate funds were used to buy it. But let’s add another wrinkle – maybe Shelley contributed the down payment from separate funds, but Norma made the mortgage payments. She might claim an interest – perhaps a “marital” lien, saying that some of the equity value was acquired by her for the value of what she paid. Albemarle and Adelaide could be anything from the sole owners to part owners to having no interest at all.

Hopefully, all the complications would be identifiable in the “lack of probate” affidavit. Of course, Norma could open a probate for Shelley (especially if there was a will), and no matter what Albemarle and Adelaide would claim, the probate court would deal with it. The title company would follow either Probate Path No. 3 or 4, and a deed from the personal representative in the probate would be sufficient.

Where there’s a will, there’s a way… Or not! Probates & Real Estate Explained. 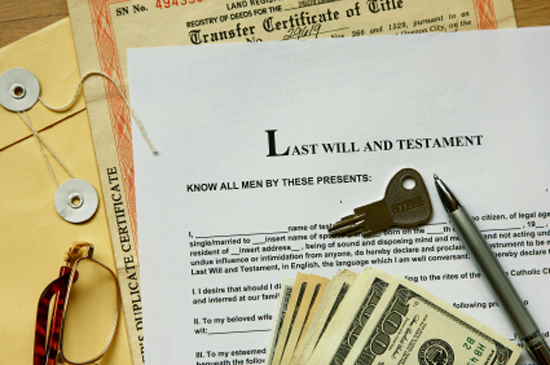 Mom just passed away, and the family wants to sell the home. This is a listing with a motivated seller. But who actually owns it?

Of course, the family home (if it isn’t in a trust) will automatically go to the surviving spouse without the need for a probate. But, what about a married person who owned the house as separate property, or Mom who was widowed? Washington law (RCW 11.04.0115) identifies heirs at law who inherit when there is no will, including (in this approximate order) the spouse, children and grandchildren, parents, siblings and children of siblings.

A formal probate allows for the protection and orderly distribution, after payment of debts, of the assets of the deceased to heirs and/or devisees or a sale to a third party by the personal representative. Nonetheless, even though Washington probates are not expensive or time consuming, they often are not done. But how else will the buyer know that all of the title interest is properly conveyed? What if there are valid liens (including estate taxes or state Medicaid reimbursements) against the estate that would otherwise be paid in probate? That is where the “lack of probate” concept comes into play.

With or without a will

When someone dies, that person will be either testate (with a will) or intestate (without a will). Both can be probated – but it’s not required, even though RCW 11.20. 010 says a will must be filed with the county superior court.

In order for the title company identify who these people are, or whether there is an unprobated will (which could give an interest to a non-relative or charity), it uses an affidavit. The affidavit, usually signed by a relative, must identify all these interests – including the estranged prodigal son who’s been incommunicado for years. It says when and where the deceased lived and died, and identifies any unprobated will or foreign probate. Finally, it states whether Mom received Medicaid benefits, and identifies the value of the estate for estates tax purposes. Based on this information, and deeds from all potential claimants and releases of liens, the title company can usually assume the risk of future claims and insure clear title in the buyer.

Keep in mind that this can be used when the will is probated in another state. Since foreign courts don’t have jurisdiction in Washington, an ancillary court action can be opened in Washington Superior Court that essentially blesses what the foreign court orders. Again, however, that expense and bother can be avoided with the lack of probate approach.

The Realtor® can help the family gather this information and get it to the title company so that the closing can take place and everyone is happy.